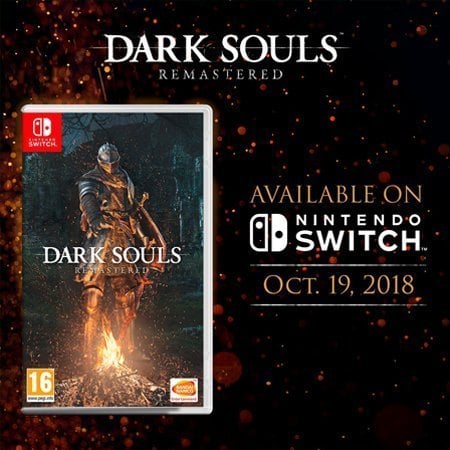 After a delay and a lengthy period of radio silence on the matter, Bandai Namco have finally taken to twitter to announce that the much anticipated Dark Souls Remastered for the Nintendo Switch will be releasing on October 19th for both the UK and US. In addition, an amiibo based off the titular Solaire of Astora character will be releasing alongside it on the same day. This amiibo, as a reminder, will simply unlock the popular "praise the sun!" emote for your character early without having to raise affinity with the covenant of the sun first. Bandai Namco also state that a network test is planned to be taking place for the game on the Switch, though no specifics were given as to a time-frame other than "prior to release."

Gee Ninty and Bandai...you sure made me WAIT -___-' Well no matter I got it on PS4 at launch but am gonna replay on Switch.
I can already see a bunch of custom **** like story, enemies, restored content on dark souls remaster switch. Hype train!

'Bout bloody time, this is one'a the few delays t' of ever earned a little ire outta me. I only hope it was done for internal reasons by Ninty, rather than necessity. Apparently the Switch remaster was developed by a different team than for the other two consoles 'n PC. If the team's incompetence was the reason for this delay, that might bode a tad poorly. Though I reckon it's more likely t' do with the paid online service launchin' in fall, or maybe even the Amiibo's distribution.

Either way, make room for me on that hype train.
You must log in or register to reply here.