Netflix Lean Towards Wii For Success

According to wii.nintendolife, Netflix is very sure the wii will have succuss. 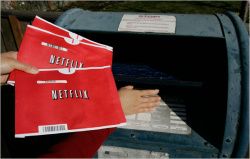 Put your mail-man out of business with: Netflix for Wii™!

Netflix is coming to the Wii very soon, according to one the company's senior executives. TheWiire.com reports:

Netflix Vice President of Corporate Communications Steve Swasey anticipates seeing a lot of success (without predicting any numbers) on Nintendo's Wii platform. He notes the system's American install base, saying, "26 million homes in America have a Wii. That's a whole lot of folks."


The key question, as Swasey indicates, is whether Wii owners will want to watch Netflix on Nintendo's home console.
"We think that the desirability of watching movies instantly on the Wii via Netflix is a wonderful opportunity for Wii homes. And so we think it's going to be very well adopted."
​
If your interested in learning more about Netflix and what it offers head on over and listen to the interview yourself.
Whilst we see the gap in the market, HD will surely be the dominant force for on-demand video in future years. With that in mind, is Netflix merely looking at a stop gap with the Wii?
Click to expand...

I'm looking forward to being able to watch Netflix on my Wii. I was about to go out and buy a roku or a new bluray player when they made the announcement in January.

Anyone heard when Netflix may be shipping their Wii Disks? All I've heard is "spring" which actually starts this weekend (finally time to thaw out).
S

Netflix has now shipped their Wii instant streaming disc. You should get your copy any day now (if you didn't already).
:biggrin:

I used to pay monthly for Netflix, I think I paid about 10 bucks a month for like 4 DVd's or something? I can't remember! Anyway, I'll totally dig this if there rentals are better then the PS3 movie rentals. I think each movie should be $1.99.
L

We just got our Netflix/Wii disk today. Once you insert the special Netflix disk, you're given an activation code to enter online from your computer at the Netflix website. Once your account is verified and everything is activated, your Netflix Instant Queue displays on your TV screen. You use the Wii wi-mote to navigate the movie. Very simple to use. You can even browse the Netflix library online from your Wii and add more movies to your queue.

Currently we're watching "Return to Witch Mountain" via the Wii on our Samsung 46" LCD HDTV. The movie buffered/loaded almost instantly. No skipping or stuttering of the movie. Picture quality is very good. This is so much easier and more convenient than hooking up my laptop to the TV to watch those Netflix Instant movies. Better performance too.
You must log in or register to reply here.

Sega: Pigeonholing Wii Only for Casual is a Mistake