Halting Wii U System Update May Brick the System 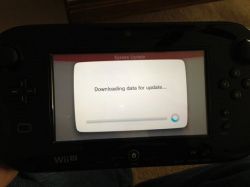 A good time for a nap?
Be careful, gamers

A number of you in North America likely have your shiny new Wii U setup, and you've probably installed the day one update that's required for access to features such as Miiverse and the eShop. According to reports out in the Twitter-sphere, however, you may also be one of a small minority that's inadvertently bricked your Wii U.

The high-profile case that's sparked the tales of woe came from Ben Fritz, film business reporter for the LA Times. He was installing the hefty update (reportedly around 5GB, though that's not confirmed), wasn't convinced that it was still working due to the progress bar not moving and unplugged his machine to start again. When he loaded it up, he discovered that the system will no longer play any games, bricking it in the process. While some criticized Fritz for unplugging during an update, he reported that he had other gamers tweeting him to share similar stories.


The tweets keep coming from people whose power or Internet went out during the 5 gb update and now, like mine, their Wii U is a brick.

​
Our own Morgan Sleeper had a scare of his own during our Wii U launch day live coverage — check out his entry at 18:25 — where someone unplugged his system during the update, but thankfully it was still working and unaffected. That said, the message is clear, when updating your Wii U don't get impatient and unplug the system in the hope of starting again; you should also hope that your internet doesn't go down, either.
Click to expand...

Well, this certainly ain't surprising. It's old news that goes back far as the first Wii updates. :lol: This ain't news at all really, just confirmation of a flaw all gaming consoles need t' bloody fix already: they've absolutely no ability to rollback firmware.
OP

I agree dude, ninty should really do something about this prob from the get go.

Thanks for the heads-up.
OP

It took awhile to update but worked and up to date

Lucky I'm not stupid enough to unplug anything during an update

What were Nintendo thinking? Giving us 5GB update, that is far too much data. Do Nintendo think we have ultra fast internet like they do in Japan?

That's why I got the deluxe Wii U

What, does the Deluxe process information faster or somethin'?

What, does the Deluxe process information faster or somethin'?
Click to expand...

Nintendo can fix this situation!!

Yes, Nintendo can fix this with a download manager specially for those people with slow internet. Allowing to pause and resume the downloading when you want, also allowing the background download while you play a game, etc.. Another solution could be send firmware updates throught a special free disc or included in future games as they did with the Wii. Use a compression system to reduce the file size and improve the dowload time, and split the file by parts to download them at different times.
Nintendo can use the double firmware flash feature to avoid the console brick by including a restore flash file that automatically reflash the system if the process going wrong, and unbrick the console to its normal status.

Calm down dear, its a only a one time update

DBloke said:
Calm down dear, its a only a one time update
Click to expand...

Not really, they will release another firmware update next week to fix the freezing issues of the aplications.

From what ive read online it was a download of some of the channels, normal updates will probably take about a minute
You must log in or register to reply here.

Nintendo Determined to Beat Hackers with Wii U and 3DS