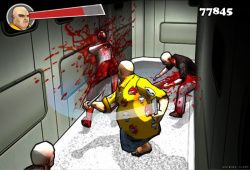 You don't see a whole lot of blood and guts on WiiWare, so Bloober Team's upcoming episodic vamp-fest Last Flight certainly stands out among the crowd. We spoke to Marcin Kawa of Bloober Team about how development is going, getting beat to the pop culture punch on vampire popularity and a bunch of other good stuff.


Nintendo Life: What's your role in the development of Last Flight?

Marcin Kawa: Officially it's executive producer but I'm not a huge fan of official titles and stuff like that. I just work with the team to make the game as good as possible.


NL: We have to ask: are there snakes on that plane?

MK: Oh, the snakes question. Well, I can't I spoil that. Samuel wouldn't be happy, that's for sure!


NL: How long have Bloober been working on Last Flight? What have you drawn on for inspiration?

MK: Everything started in December 2008 so it's been some time. On the other hand, if you want to make a great game it just takes loads of time and effort. Thanks to solid funding (we're a VC-backed company) we were able to focus on development. As for inspiration, that's a tough one. I think it's fair to say that we're influenced by modern cinema (especially Tarantino and his sense of humour) and we just love action-adventure games such as Devil May Cry or even old Dino Crisis (PSOne). It's hard to generalise here as each of us is different and twisted on his own.


NL: Tell us about the main character, Larry Adelman. What's his story?

MK: He's a culinary critic and famous cook. A guy who makes a living telling people what to eat, where to eat, and how to prepare the very best dishes. He also has a very specific sense of humour and loves Hawaiian shirts. He's on the plane to Europe to visit some places and learn about local cuisine. However, as in life, stuff happens and Larry is forced use his knife skills to protect his life.


NL: Violent games aimed for older audiences, like MadWorld or Dead Space: Extraction, tend to be critical hits but relative commercial blips on Wii. Why do you think this is?

MK: First off, I don't think that violence makes this game mature. It's much more: sense of humour, dialogues, references. Of course, violence's there but it's not the essential part. You could compare that to watching Pulp Fiction. It's not a movie about drugs and swearing but can you imagine it without those themes? Regarding game's performance, first you need to define what do you mean by commercial blip. Then think about budgets involved in making those games. We believe that there's enough Wii gamers to make us happy. We don't need to sell 1 million copies to break even. It would be nice and we're aiming high but there's no such pressure. That said, we still risk a lot with Last Flight but we believe that people will appreciate our effort. The goal here's to create great game.


NL: What pulled you to WiiWare?

MK: We really like the concept of digital distribution. That way we can make the game we would like to play, without any pressures from a publisher. That's pretty important. Additionally, splitting the game into episodes allows us to learn what gamers like and dislike about Last Flight. Thanks to that we'll be able to make the second episode even better than the first one and that wouldn't be possible with boxed game.


NL: Vampires are all the rage these days, but it seems a twist to the lore has become a necessity. What kind of vamps will Larry be chopping? Will they glisten in the sun or are they more of the straight-up bumpy face kind?

MK: Well, the idea to put vampires into the plane is more than two years old now. Back then it was all about zombies and we wanted to do something different. Anyway, we like zombies, vampires and bunch of other creatures. Our vamps evolved from Dracula-alikes to ones that look a bit like zombies. I like to think about most of them as ghouls, just like in the Hellsing anime. They're transformed by a vampire and controlled by him to some extent.


NL: Is/was it tough finding a publisher willing to back a gory, episodic WiiWare game?

MK: We don't need one, that's the beauty of digital distribution. We didn't feel like having someone to tell us how our game should look like or that we we should finish before Christmas. Having a publisher has its own advantages but we don't need one to create Last Flight.


NL: How many episodes do Bloober have planned? When can we expect to see the first one and how long will we have to wait between episodes?

MK: We're going to do four episodes. If the game will be very well received we'll think about another 'season'. After each episode we plan to collect feedback as community is very important to us. We'd love to hear from people what they think about Last Flight and what they expect to see in future episodes. The game is mostly done, at the moment we're working on the size and overall 'gaming experience'. It's not a problem to pack everything so it looks compressed and ugly. Last Flight is going to look as good as any other boxed game, just check out our screenshots and see yourself.
Click to expand...

Interview on red steel 2 & ask questions to the developers!