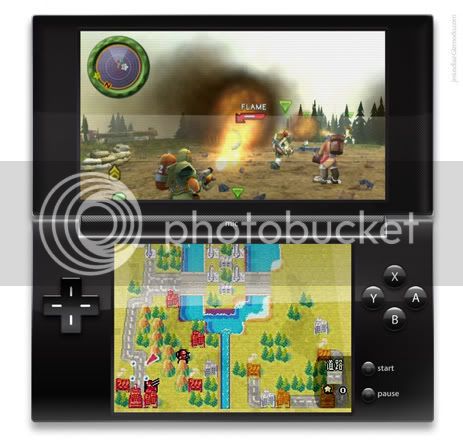 Here's our vision of the next Nintendo DS, compiled from rumors, logic and (wet) dreams. It's got a slimmer profile and a seamless shell thanks to a MacBook-style hinge. Inside: more power, larger screens—the top one being a 3.5-inch widescreen to play downloaded movies—a flash card slot for media and continuation of that amazing sleeker look. Hit the jump for our high-definition mock-up with full specs.

First of all, while this may not be the actual next-gen DS, it can't be very far from the truth. We don't want anything crazy: in fact, most of the things we ask for here are already being contemplated by Nintendo, according to the latest rumors.

Bring on the Power-Ups
Internally, we would like a slightly faster processor and better graphics. Given the prevalence of integrated chipsets that combine 3D graphics, multimedia and communications into a single low-voltage die, it would be very easy for Nintendo to upgrade the engine of its flagship.

At the core, the latest generation of processors will guarantee the very low power consumption crucial to a portable. Thanks to phones and PMPs, the price of these components has come down to the point where it's economically feasible for the big N to eat a few mushrooms and make the Nintendo DS a portable console closer in performance to the GameCube than to the Nintendo64. It could be capable of driving denser, more complex 3D graphics, offering proper speech recognition (unlike Brain Training now) and displaying built-in video decompression and scaling.

We also wouldn't mind Nintendo dropping compatibility with old Game Boy games, provided it added 1) an emulation engine connected to the Nintendo Wii arcade store (with Game Boy titles) and 2) an SD card slot, to store those games as well as movies.

The icing on the cake would be an accelerometer inside. These could open new possibilities to games. One of my favorite games in the iPhone is Labyrinth, which allows you to guide a ball through a maze using the accelerometer, just like you use the Wiimote. Nintendo actually pioneered this back in the Game Boy Color days with Kirby Tilt n' Tumble so we're really just asking to bring it back.

Finally, a built-in light sensor could be used for two things: first, to save energy by dynamically regulating the backlighting of the screens according to the ambient light and second, for games like Boktai.
Click to expand...

Wow that looks cool if it's like that. The DS does need to upgrade some stuff like it has what 4MB of RAM iirc. More power, more players. I'd love to have 4v4 in CoD4 or MPH as it would actually make the games far better. Tbh DS really does need a graphics upgrade as well as the currne tones are only decent. SD slot sounds cool. As long as the bottom isn't like the lite and it's as durable and comfortable as the phat.
L

Do you fear the dark?

is this the vision for the next ds? like the next foray into nintendo's handheld gaming? or just the next remake (the next DSlite)?

Its got some better specs but it looks nearly the same ._.

i thinkit would look kinda cool, for a ps2p, but its too much like a ds, thats where the problem is...
W

Kai said:
i thinkit would look kinda cool, for a ps2p, but its too much like a ds, thats where the problem is...
Click to expand...

maybe they could join forces and make the best handheld of all time!! yea right but that would be awesome

That would be a nice improvement on the DS, but that's not an entirely new concept, therefore it couldn't be the next handheld installment.
N

I can't see this design happening. There are a number of reasons why but the most would be that that design looks very easily breakable. And the core market for handhelds are children and a lot of kids don't keep the best track of their gaming materials. (Especially the screen)

I personally think that looks excellent. I really like the design and the look, so let us hope that the next DS (or whatever it is called) looks similar to that concept model.

hmm it would be great and stylish

What game is that in the picture of the speculated DS? That game looks awesome... like some kind of Advance Wars game.
You must log in or register to reply here.

J
Next gen DS on the way?

So theres a brothers in arms game coming out for the DS....

What Is Next Gen?