Team Meat: We'd Work With Nintendo If Meat Boy Made It Into Smash Bros. 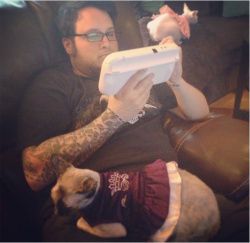 
"Nintendo are you listening? Smash Bros! Just f***ing use the character"
Super Meat Boy creators Edmund McMillen and Tommy Refenes have been speaking to Eurogamer about their future projects, and have revealed that they would be prepared to work with Nintendo again — with one small caveat.

McMillen: "I want Meat Boy to be in Smash Bros. That would be the one reason I'd really want to develop for a Nintendo console."
Refenes: "That would be amazing! If they could guarantee us Meat Boy would be in Smash Bros., we would do something."
McMillen: "Nintendo are you listening? Smash Bros! We would ask for nothing in return. Just f***ing use the character. Put him in the game. It's free!"
Refenes: "If they wanted Mew-Genics or something and they could promise us Meat Boy would be in the game we'd develop Mew-Genics for them. Not exclusively, of course. This is how they would buy it from us. And that's a very cheap price."
​
Mew-Genics is Team Meat's latest game, and involves cats. It's coming to the iPad. Super Meat Boy was due to hit WiiWare a few years back but ended up being canned. McMillen has been famously critical of console development, thanks largely to issues relating to a proposed port of Super Meat Boy to Microsoft's Xbox Live Arcade. He remains cagey about jumping back into console development as a result.
He said to Eurogamer:

You have to take into consideration that when you're independent, you don't want to take the risk of jumping on a platform that you have no idea how it's going to do until it's already established. When you look at WiiWare, when it bloomed when World of Goo came out it was like, 'Holy s***! This is a great platform to develop for,' and then it was like a gold rush and everybody was jumping on WiiWare.
What they should have done was wait a little longer to see if it would continue. Because then it just dropped and nobody cared.
Imagine if we got put in another situation like with Xbox where we were nailed down to this contract of semi-exclusivity and we had to jump through all these hoops and kill ourselves and then pay s***loads of money to get on a platform that's not established yet and then it comes out and doesn't do well - imagine that. That's f***ing horrible.
​
Despite his aversion to making console games, McMillen says Team Meat is keeping its options open:

If Nintendo or Sony or Microsoft - well, we'll cut off Microsoft at this point - but if Nintendo or Sony came to us and said, 'we have a minimum guarantee of X, Y, Z, we really want you to develop a game for our next system that's coming out in year whatever, if you have something to work on we want to work with you, here's a free kit to develop for us and here's a minimum guarantee or advance,' then we'd be way more inclined to develop for them, but it wouldn't be an exclusive deal. That's an important thing for us.
​
Would you like to see Team Meat develop for the Wii U eShop? We think we already know the answer to that question, but let us know with a comment regardless.
[via eurogamer.net]
Click to expand...

What do any of you have to say about this? I think Team Meat is threatening Ninty in a way "if you don't do this, we won't help" kinda way, selfish brats.

hah that would be nice. I'd also like to see many other characters make it. Idk why Nintendo didn't put megaman into ssb

oh... Yeah, but he should still be in it

He's nintendo...ish and he's a classic

Considerin' McMillen literally insulted Microsod, I wouldn't consider it a threat so much as a (disrespectfully presented) proposition... McMillen clearly knows what gettin' a character into Smash can do for popularity. Fire Emblem literally went worldwide just cause'a two characters makin' a cameo. If Meat Boy got int' Smash, it's not only a gateway into WiiU ware; or whatever the hell they're callin' it; it's free advertising. Even if they don't get paid for said game, they've still much t' profit in this deal.

... Problem is, they're a third party. Whether Intelligent Systems begged Sakurai to include Fire Emblem characters or Ninty included 'em for advertisement willingly, I don't know... but I do know IS has a history with Ninty consoles. Team Meat, does not. They're in no position t' propose a deal like this, even if it's profitable for both sides. Indeed, the deal in itself is disrespectful. As such I doubt Ninty would bite. Meat Boy is famous on the internets but by no means iconic nor an interestin' character like Sonic(?) or Snake. They ain't gonna include 'em 'less he tops popularity charts. We all know that ain't gonna happen any time soon.


Ninja1 said:
hah that would be nice. I'd also like to see many other characters make it. Idk why Nintendo didn't put megaman into ssb
Click to expand...

assasin y u gotta breed offtopicness
You must log in or register to reply here.

Super Meat Boy May Skip WiiWare and Head to Retail