ilikecookies and I are at it again, and we have another one night tournament scheduled for SEPTEMBER 9, 2007 @ 5:00PM PACIFIC STANDARD TIME. If you want to join, pm either ilikecookies or myself with your friend code and your gametag name. Same rules from the other tournaments I have hosted, but in case you forgot.


RULES​
-This is a first come first serve thing. there will be no replacements what so ever, if your opponent doesn't show, you move on. We would like a minimum of 16. A prize will be given if atleast 75% of the people who signed up show. (if 16 people sign up, 12 have to show for the winner to get a prize) A picture will be taken of the prize to show proof of purchase.

-If there is a disconnection, the player with the most points at time of disconnection gets the win. If there are numerous disconnections by the same player, we will catch on and you will be dq'd.

-You must be free sunday night at 5:00pm pacific standard time

-You have to be logged onto wiichat, with this thread open during the tournament to check for updates for who your next opponent is. (press f5 to refresh the page). You must "check in", by either pm'ing your opponent, posting something in this thread, or just by being online between 4:30-5:00pm pacific standard time

-Scores must be posted once your match is over. Failure to do so will result in disqualification of both players.

-Friend code must provided. To make it easier, add everyone in the tournament to your friend's roster before the tournament starts. Best by saturday, so you you can move on to the next round quickier. There shouldn't be any excuses that there are problems with connections, if they are already added.

-Home team wil be decided by who finishes their previous match first. For the initial matches, home team will be chosen at random. 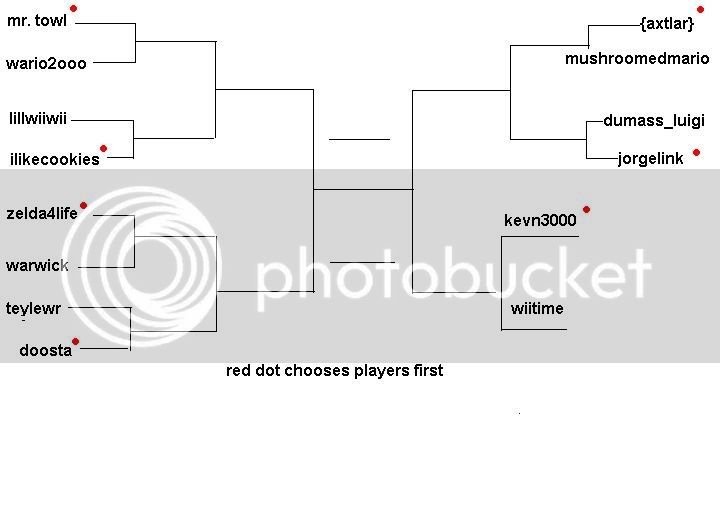 ZeLdA4LiFe said:
YUP im here first one to sign up

i want in i just sent doosta a pm
OP
D

mr_towl said:
i want in i just sent doosta a pm
Click to expand...

oh, thanks Wario! I have sent a pm to Doosta already, and I cannot wait for this...I know what he's gonna do: thumb up....I guess I'll have to add all these here fellows, huh?

lol...yup....i have everybody except mr towl

What about you? do you have you in your list?

Lol..yeah, you said you have everybody except for Towl..well you are in this tourney too right? I see your name in there, so do you have you too? lol, never mind if you don't get it still.

so when you play you, who wins?
You must log in or register to reply here.

north american one night only tournament
11 12 13