Snake was revealed during the first Brawl trailer.

I should really just stop sayin' anythin' on this matter, as my memory is currently on a bad streak. :lol: I completely forgot 'bout that unexpected bit at the end where Snake shows up.

Have you guys ever tried creating a group roster? There's me, Splash, Delecatty, Mr, and Wiiassasain. That's enough people to make a group roster with. Would you be interested? I can make the roster itself, as well. If you are interested, would you wanna do a PREDICTION roster, or a WHAT WE WANT roster?

I've been part of many communities, and never been able to finish a group roster.

You know my predictions from that tl;dr

So what exactly do you have in mind?

Don't know nothin' 'bout this "group roster" business (I'm confident my common sense is just failin' me at the moment), but I take it it's somethin' akin to this thread, but more collaborative 'n organized. Like the Moveset thread, minus the movesets.

Yeah, well, we would work together to come to an agreement on a roster. We would go franchise to franchise adding (and possibly subtracting) characters until we had our agreed upon roster. And if we didn't agree on a subject, we would vote on it. And then I could make a roster akin to this one 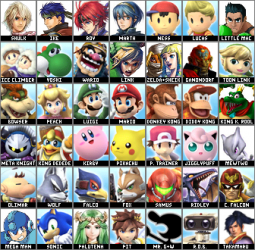 But with OUR characters on it

Super Smash Bros. 4 Roster Predictions and Wishlist
And we edit the first post with the results.

Or do you want me to do it.

A grand idea. I say we make a prediction roster, since we've certainly been raving on how Brawl could've had better characters/what we want in Smash 4 since 2010 ourselves... or at least, me 'n Wiichat's old Smash crowd have.

I imagine we'll start with the ol' plumber bros. franchise?

EDIT: MR's got the right idea, a new thread would be best.

I'll do it, just give me a few minutes.

Link us when your done because we are lazy

Mr. MR said:
Link us when your done because we are lazy
Click to expand...

Speak for yaself, I hit New Posts every 10 minutes. :lol:

:lol:
Sticky that thread
and the Moveset Thread while your at it
OP

...Tharja? Suuuuure. She'd be nothing more than an Assist Trophy, at best, as much as I like her.

but I don't see it personally

I would rather see Micaiah
You must log in or register to reply here.