*UPDATE 1* Matt Casamassina�€™s blog was updated with an invitation to a Nintendo event taking place on September 14th. You can check out the (mostly blurred) invite by clicking HERE. Could this be the date and place where Nintendo finally unveils the Wii release date and price? Huge thanks to NDA for the heads up. Since Matt made a post about the event, I guess this means I can mention it as well. Just a couple hours ago I received the same invite from Nintendo. I will be on hand to cover the event live.

*UPDATE 2* 9:40AM: Crowds starting to gather for Nintendo�€™s �€œWii Prove Our Promise�€� presentation. Rumors on the ground here in Leipzig suggest several never-before-seen games from EA and possibly from other publishers will be unveiled here today. Just 35 minutes now until the presentation begins. (at GWN website)

*UPDATE 3* 10:05AM: The buzz is picking up with international media now converging on Hall 5 to hear Nintendo deliver their presentation. 10 minutes to go! (at GWN website)

*UPDATE 8* 10:47AM: Guest speaker mentions his love of Brain Training and says he plays it all the time. They hit play and a video appears on the screen of the TV presenter guest speaker. He is playing a DS Lite. The game is Dr Kawashima�€™s Gehirn-Jogging. (GWN)

Aha - now they�€™re talking about speaking English. On October 13th, they�€™re going to launch �€œLearn English�€� on the DS. They�€™re about to do an on-stage demo.

Well, �€œEnglish Training�€�, then. It tests the level of your English skill - if you�€™re German, obviously.

You listen to the text and then write it on the lower screen, the faster the better. Mystery TV Man tries a few lines, and the program duly reports that he�€™s �€œOK�€� at English, while playing sad, mournful music. Tom is threatening to storm the stage. We should be fine as long as he keeps his pants on (Eurogamer)

*UPDATE 13* 5: 07 Sorry, we dropped out for a minute there. You didn�€™t miss anything terribly exciting - they basically ran through the demo of Zelda DS from GDC last March, showing off stuff like drawing a squiggly line on the ocean to direct a boat, drawing an hourglass to open a door, slashing stuff in a top-down dungeon, and so on. (Eurogamer)

*UPDATE 14* 5:11 Dear lord - dancing men! And women. They�€™re flailing around the stage with Wii controllers. One of them looks a bit like Vin Diesel. Tom has identified the music as N.E.R.D. - I�€™m not sure why he knows that. (Eurogamer)

*UPDATE 16* They’re playing a round of Wii Sports Tennis. The little girl is holding her own, actually. Mystery TV Man isn’t. (eurogamer)

The boss of Nintendo Germany is on stage to introduce a new sports title. “Sport is currently the new trend at Nintendo.” A message from German footballer Philip Lahm. He’s playing on the Wii in a football strip. (eurogamer)

It’s a Mario Smash Football / Super Mario Strikers title by the looks of it. They’re going to play it on stage now - they first choose captains. Bowser, Peach, Mario and Donkey Kong are selectable, and then they pick companions and a stadium.

They’ve chosen Thunder Island as the stadium. “Rated: Lethal!” Woo! Here’s hoping for messy fatalities. It looks very similar to Super Mario Strikers, graphically. Shot from the side and above, and very similar shooting mechanism. (eurogamer)

*UPDATE 19*It’s got special moves - super shots. Mario leaps into the air and fires the ball down from the sun. Another player holds up his hands, using the Wii controller to block. (eurogamer)

*UPDATE 20* 5:19 Balls appear at points on the screen, and you have to drag the hands to their position to block in a split-second.

Battalion Wars 2. Cleverly abbreviated as BWii. Do you see what they did there? DO YOU? (eurogamer)

*UPDATE 22*
That will also be playable on the stand. Now they’re talking about third-party support… Listing all the publishers working on the Wii.

Time for another trailer reel, kids. This one looks like the video Nintendo showed at TGS last year (which was videoed from the perspective of the TV screen to show people playing games with the Wiimote), but with game footage cut into it. It’s showing Wii Sports Tennis at the moment.

That seems to be our lot. So, in summary - the actually new things from the last hour were… Mario Strikers Charged; Battalion Wars 2; a pink DS Lite on October 27th; and about 300 pictures of a model with erect nipples on Pat’s camera.
Click to expand...

News by Matt from IGN:

No launch date or price, what a disappointment, a lot of people all over the net got really upset! Oh well though, Nintendo never said they'd be telling us the release date or anything. Plus: We=Why in German, so in German it is: "Why prove our promise?" But, I can assure you guys that September 14th is the next best guess for the announcement of the price and launch! And I can assume that since we've been waiting so long for something as simple as launch and price, that what Nintendo has in store for us, is absolutely big. 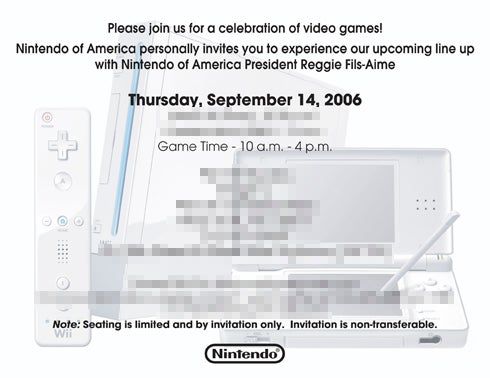 Thanks! It was a rough night! Staying up to get all this news and then posting it on this site ASAP! I'm gonna go to bed now!

Read all your stuff in another thread but thanks for tidying it up for us!
I

its people like you i love (dont take that sexually)...... yeh anyway a very thank you to you.
M

This was the worst day of my life......... I cant beleive i sat next to the screen for 7hrs+ for nothing, yes i was on the computer far before the convention even started just posting and posting about speculations and countdowns and everything... and they, nintendo,...... they let me down..
I

m7ticalm said:
This was the worst day of my life......... I cant beleive i sat next to the screen for 7hrs+ for nothing, yes i was on the computer far before the convention even started just posting and posting about speculations and countdowns and everything... and they, nintendo,...... they let me down..
Click to expand...

teaches you a lesson.....not to wag school just to learn the wii release date......
M

You should've just went to skool! Nothing big happened at all...
A

hey... how was sony conference (i like to be unparcial but u know they always **** and copy nintendo)
You must log in or register to reply here.