Soundtrack (listen as you read lol) [video=youtube;-SdgjYFKdJ4]http://www.youtube.com/watch?v=-SdgjYFKdJ4"]http://www.youtube.com/watch?v=-SdgjYFKdJ4[/video]
[video=youtube;SCTpDw3fjrU]http://www.youtube.com/watch?v=SCTpDw3fjrU"][/video]​
Plot​
The universe has come to an end. Everyone knows the story of Sora the great Keyblade Weilder who defeated great odds to save the worlds from destruction and darkness multiple times. But a more famous story nowdays is the story of his fall. Darkness befell the worlds again, harder and stronger than ever in a new race called the Forgotten. They are created from the meories of fallen hearts of darkness. Ironic as it is, they have hearts, they have souls, but even though they were created by memories they have none. They just.... exsist. Because of this, they were unknown for a long time. Thats why it was so strange when a few years ago they began to emerge and they were killing mercelessly under the lead of a cruel and hateful Forgotten by the name of Semnax. ​
Sora, who was at this point at the age 21, stood to fight the Forgotten and destroy them before they could hurt anyone else. When the universe needed him though, he failed. His keyblade had no effect on the creatures and eventually it just stopped comming at his summon. Not long after that, the great Keyblade warrior vanished. His fate and werabouts are unknown and they have been since the Forgotten Uprising.
Destiny Island was the first to fall seige of the Forgotten and the darkness they could command. They very easily took control of that world and their wave of evil spread from there until everywhere was taken over by darkness, all of the light was nearly smothered out and no one and nothing was enough to stop it.​
It's been years since then. Hundreds of years of tyrany. See, after the darkness took over, so did Semnax who is now known as the king of Kingdom Hearts. So much darkness surrounds the universe that Gummi Ship Travel became impossible because pilots couldn't see where they were flying. It's hard to see the stars anymore... it's hard to know that there is light anywhere so a lot of people just gave up. The Forgotten now control everything and under their law, it's ok for Nobodies to kill beings of light for their hearts. It's lawfull for dangerous Heartless to kill needlessly and destroy hearts slowly, in fact it's their job. Anyone who tries to bring back the age of the light falls under their mercy. Toward the beginning, thousands of people were killed because of breaking the law of Light. It was terrible and it still goes on. ​
People of light still live, but they must hide their hearts of light through silence or they are arrested and killed. ​
Anyone found with a Keyblade is put to death instantly along with their families to ensure that Keyblade weilders stay extinct and same goes for the seven purest of heart who are currently on the most wanted list. (they hide to avoid being killed)​
It's time for the tyrany to be put to an end. We tried to speak to our parents and the older generation about a revolution but they are afraid. Enough silence, enough darkness, enough tyrany and enough slavery. It's up to us now, young light generation to save our families and our loved ones from oppression and despair! It's time for the light to strike back and take back a world that is fair, pure, and just!
My name is NoZomi and I am among a resistance called the Light Knights. We are young, many of our fighters are as old as 18 or as young as 5. We have few fighters older than that because the older generation has lost hope and with that, their abilities to use the powers of light anymore. Thats why it's up to us, the younger generation. Up until now, we lived reletively normal lives. As long as we were submissive and meak, we were left a lone as our friends were killed by heartless who would occasionally attack towns with no attention from our government. We attended school and went home in constant night time, without even the hope of stars in the sky to know there is still light. Up until now, we were children who were in fear each and every day of death, or being kidnapped and enslaved by the royalty of darkness. Up until now we were cowards but now is our day to stand up and fight for the light. Thats why I joined the Light Knights. Thats why we all started the Resistance.​


~Rules~
1- No God-Modding
2- Power-Playing is a no-no unless given permission from the characters author.
3- Mary Sue Characters will be killed on sight (you have been warned) What a Mary Sue Is.
4- Use at least 6 sentences in your posts. It's not hard to do really it's just a way of avoiding spammish noob stuff.
5- Keep discussion and stuff to the OOC thread please and thank you!
6- Have Fun​


*Note- I'm not sure how many Kingdom Hearts Fans there are here but I decided to give it a try anyway. ​

What is power playing?
OP

KHP? What's that mean? Do I have to be a member?
OP

No lol you dont have to be a member. You can join if you're not. I just recognised your signature and thought you were a friend of mine from a different forum. I see now, he just made it lol.

Does the character has to be from KH or can we make our own?
OP

Make up your own lol this RP is a different generation than the original characters.

I have no picture, because I can't draw very good.
Name: Big O.
Age: 17.
Physical Description: Big O is tall. He wears a black cloak (the same as Organaztion XIII, but with red flames at the end.) Big O has red and blue eyes.
Weapons: Big O has 2 Keyblades. One of the Keyblades are called Alpha. The other is called Omega. Both Alpha and Omega have minds of their own. Alpha is the darker Keyblade, bent on eradicating all life except the user. Omega, however, has the lighter side, created to make the entire universe full of light.
Bio: During the dark ages of the universe, Big O was part of a secret group called the Enforcers. The Enforcers job was to deal whatever enemy was to disrupt the darkness. If The Forgotten could not handle it, the Enforcers can. However, Big O did not like what they were planning, and decided to leave the group. Before he left, the leader said, "You'll die if you go out there." Then Big O said, "I'll be fine." Big O hid in the shadows, not being seen by the Forgotten. Then, Big O heard of the Light Knights, and decided to join them in their conquest to make the universe right, to make everything normal...
Other Info: He tends to help other people, his allies, his friends. But turns into a BAD mood when one of his friends are hurt from a enemy.

Yeah that works. ^_^
I'll have my profile up soonish/

Damn, I wish I could join, but I probably wont be able to see WMBQs RP to the end seeing as I go off to basic training soon. And I just had a wonderful idea for this too.
OP 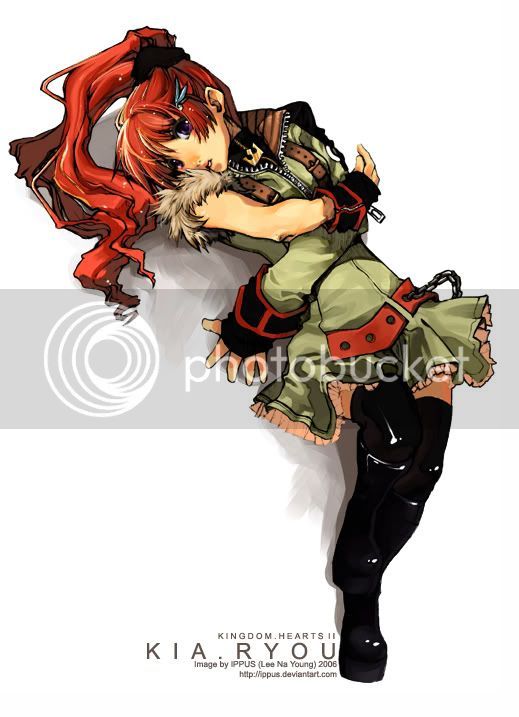 Physical Description:
She's about 5'6'' tall and weighs about 114lbs. Nozomi has long bright red hair and deep violet eyes. She has a light scar across her right sholder that she covers with her jacket. No one but her and her mother know how she got it. She doesn't talk about it to anyone else. Her skin is tan colored in spite of constant darkness.
Weapon:

The sword she carries is just about as tall as her and looks a bit too heavy for her to use but she does so very well. (no i did not draw it)
Bio: (Please use at least 5 sentences)
Nozomi lives with her mother on Destiny Island. Her parents are still married but her father lives somewhere else (The World That Never Was) and is royalty for the Forgotten but her mom is light, one of the ones who have to avoid usuing thier powers.
Because of his status, Nozomi's father doesn't want the community to know about his wifes Light lineage because if the people knew he was married and father to light beings he would be ruined. So he doesn't turn them in and he also doesn't allow a devorce from her mom because he wants to keep an eye on them.
He visits them a couple of times each month and pretty much demands for everyone to act like a happy family despite how much her mom is afraid of her dad and how much Nozomi despises her father for keeping them both captive the way he does. He has people watching them all the time.
On her 12th birthday she had enough and she ran away from home and tried to leave Destiny Island by the use of a raft. She did well keeping herself hidden while she was building the raft because her parents couldn't find her for the couple of weeks that it took her to make it. She was gone for months after she set sail on the raft but her father never stopped looking for her.
A couple of months after she left, the leader of the Light Knights found her still on the raft. She was barely concious from nearly drowning, and starving and dehidrating to death. The Light Knights took her in and she spent another couple of months with the Light Knights, recovering from her near death experience and learning their objective which she agreed with. After she recovered the leader of the Light Knights offered to let her stay with them permanently as long as she earned her keep. Nozomi agreed and now is now working with the resistance. She hopes to one day return to Destiny Island and let her mom know she's ok and save her from her dad as well but for now she has to keep her identity a secret so her dad doesn't find her. She wants to help to restore light to the worlds and save her mom and friends she left behind. Helping the Light Knights was her best way of accomplishing that goal.
Personality:
She is always curious and because of that she finds herself poking her nose into situations that she shouldn't a lot and that gets her into trouble from time to time. She is very stubborn and she usually jumps into action without thinking it through first. She is very outgoing and she makes friends easily though she has a bit of a bad temper at times.
Theme:
[video=youtube;9gENFe3Zsb8]http://www.youtube.com/watch?v=9gENFe3Zsb8[/url] http://www.youtube.com/watch?v=fJBd4eeNI1M[/video][/COLOR][/U][/CENTER]​
Last edited: Feb 7, 2010
You must log in or register to reply here.